Word Walls: They’ve been around for as long as most of us can remember. I can clearly recall those hot August days, standing on a desk or a chair reaching for the bulletin board hoping there was enough space to staple all 26 letters...who needs xyz anyway?

Now, did that process always work? Not exactly. Many times, a word would begin with a letter that didn’t make the sound we heard. For example, listening to the word ‘she’, we heard /sh/, not /s/ or the word ‘know’, we heard /n/ not /k/. The word ‘our’ or ‘hour’? Forget it. I would explain these words were “rule breakers” - we needed to “know them by heart/sight” and not sound them out.

While my word wall was interactive and added to throughout the year, I saw many classrooms with a word wall that was more like wallpaper than a learning tool. I truly believed my word wall and the practice students were engaging in was helping them become strong readers and writers. Little did I know how wrong I was! Asking students to recall how to read and spell a word based on letter names rather than sounds was like asking them to memorize a suggested password. There is nothing to anchor the learning, and that’s not the way our language works.

What is a Word Wall?

A word wall is organized alphabetically using all 26 letters of the alphabet. We place “sight words” or “high frequency words” (and sometimes even content words) under each letter based on the first letter of each word. We sometimes frame the word, talk about “tall letters, letters that fall” and so on. Sometimes we add to the word wall throughout the year, teaching students to chant words by letter names and other times we just place a bunch of words on the wall at the beginning of the year and we don’t do much with the word wall at all.

When we think about a word wall, it is driven by the teacher’s point of view. As teachers, we know and understand all of the different spellings of sounds, and so we place the words under the letter a word begins with because we can locate the words that way. This isn’t the case for students. If students do memorize a word, they are able to read and spell only that word. The process does not help students learn to read new, unfamiliar words.

Working with word walls is print to speech. We find the print/letter first and then we match the sound. Our language is speech to print. We hear speech sounds before we learn to match the sounds to a particular letter or letter patterns. For example, a child can hear the 2 sounds in the word know (/n/ /o/) before he/she can use 4 letters to spell the word know. This may be why Word Walls are often abandoned in classrooms, taking up space, looking pretty, but not really being used. As Dr. Tracy Weeden said so well, "We have to strategically abandon what's not working.” - and word walls don’t work.

What is a Sound Wall?

A sound wall supports students by focusing on the articulation of sounds/phones and the various letter/letter patterns that represent the sounds/phonemes in words. This is important because when we hear language, we hear words as whole units. The sounds/phonemes in words are co-articulated. We don’t /s/ /p/ /e/ /k/ in phonemes. Speaking is natural and something we can learn to do by being immersed in language. However, reading is not natural. We need to explicitly teach students to hear the individual phonemes in the words they hear in language. We also need to assist them in producing the individual phonemes in words. Helping students recognize the way their mouth feels and looks when producing sounds will help them connect speech to print.

When we listen for the phonemes in a word, we can use a sound wall to identify the different ways to spell the sounds. For example, the word ‘know’ on a word wall would be placed under the K. However, on a sound wall, a student could listen for the sound /n/, find that sound organized by the articulatory gesture and identify the ways to spell that sound: n, kn...even gn or pn. While those spellings of the sound /n/ may not be as frequent, we are supporting our learners and giving them tools to apply these spelling to new words.

When viewing sound walls you will often find pictures of students' mouths next to each sound. This helps clue students in to what their tongue and mouth are doing when producing a sound. This is how learners perceive the sounds in the words they hear. They pay attention to the way their mouth feels, looks and acts when producing sounds. This helps them concretize and connect the sounds they hear with the print that represents them.

A sound wall is organized by the place and manner of articulation. You will often see two walls in a classroom. One wall for consonants, supporting students in thinking about the individual sounds they hear in words. The second wall for vowels, visually represented in the shape of a valley to mimic the change in position of our mouths and shift in our jaw when producing the vowel sounds. While we only have 5, sometimes 6 vowel letters, those letters represent 18 vowel sounds. Students are explicitly taught how to hear the different types of sounds, as well as to recognize voiced and unvoiced sounds.

These specifics are keys to helping students connect the phonemic awareness skills to print. This process allows students to navigate a sound wall independently. They can hear the sound, feel it on their mouth and locate the spelling. A sound wall is created from the student point of view rather than the teacher’s. This instructional tool creates opportunities for students to learn many words by transferring the knowledge of sound-grapheme correspondence to many words, rather than just one, as is often the case with word walls. 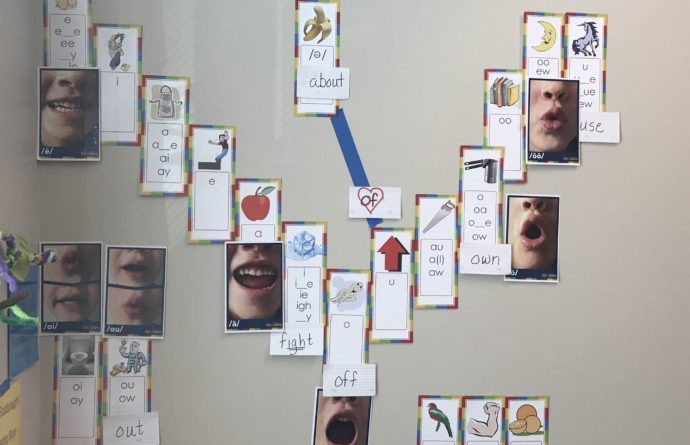 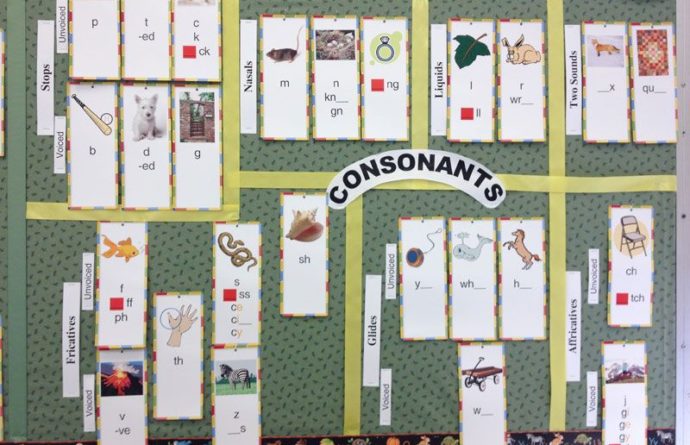 Example of a consonant sound wall

Sound walls are more effective in supporting students reading and spelling. However, they are especially helpful during times like COVID. We know many teachers are teaching virtually or in-person wearing masks. It can be challenging to help students hear and pronounce the correct sounds virtually or through a mask. A sound wall provides visuals and is organized by manner of articulation. If students can’t see the teacher's mouth through a mask, they can see a visual on the sound wall. When teaching virtually, students can see their mouths in Zoom or Google Meet and match their articulation with the visual provided by the sound wall. Zoom, Google, etc. can act as a mirror.

As educators and parents, we all want what is best for students. We always act in the best interest of our students and teach what we believe to be effective and essential. What we also know is, many of us were not prepared to do the work we are being asked to do. There are many practices I look back on and wish I could go back and change. I am committed to continue learning and growing, and with that comes change. I hold fast to the #knowbetterdobetter motto. If you are reading this blog and thinking of all of the years you have used a word wall, don’t feel bad - instead, now that you know better, do better.

If you are interested in learning more or want to know how to create and use a sound wall as an instructional tool, Mary Dahlgren has mastered this work! Check out her many resources below:

Marjorie Bottari is currently a literacy specialist for Heggerty Phonemic Awareness. She has had the privilege of working as a classroom teacher, reading specialist, literacy coach, administrator, and adjunct professor. When she's not reading about reading, Marjorie loves to re-enact "Nailed It" baking challenges with her 2 kids and husband.